Understanding the Four Stages of Alcoholism

Alcohol abuse is extremely common in the United States. About 17 million people have symptoms of alcohol abuse and have unhealthy behaviors around their alcohol consumption.[1] When you hear about alcohol abuse or alcoholism, you likely have an idea of what it might entail. You may imagine someone drinking all day, hiding alcohol from their loved ones, or drinking first thing in the morning. People’s ideas about alcoholism tend to focus on the behaviors of someone with severe alcoholism.

The truth is that alcoholism is usually a pretty complex issue. It generally happens in progressive stages over some time. There are four stages of alcoholism, and each has its own set of behaviors, patterns, and beliefs.

It is important to understand that alcoholism is not limited to only the most harmful or destructive patterns of drinking. Alcoholism progresses in stages. Recognizing unhealthy behaviors or patterns in your drinking can help you identify that there is a problem before it causes irreparable damage. Learning about the four stages of alcoholism can empower you to get the treatment you need as soon as possible. 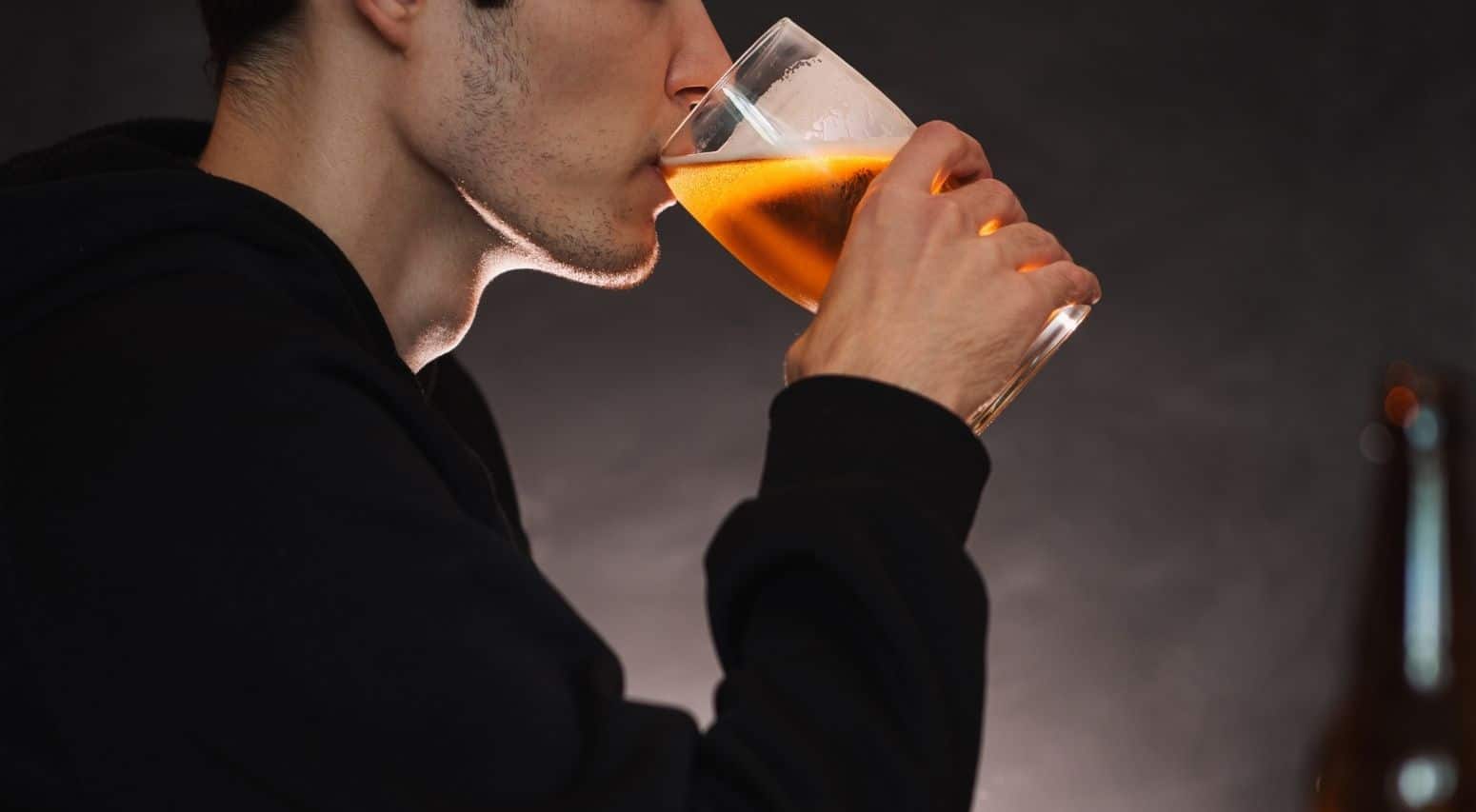 What Are the Four Stages of Alcoholism?

Alcohol abuse can start very slowly but progresses quickly without intervention or treatment. While each of the stages involves unhealthy behaviors around alcohol use, each has its own separate markers that make it recognizable.

Without intervention, many people progress from one stage to the next. The likelihood of someone becoming addicted to alcohol or other substances depends on many factors, including biological factors, social support, and other environmental factors. Mental illness, a history of trauma, and physical illness can increase someone’s likelihood of developing alcoholism.

Signs of Each of the Four Stages of Alcoholism

Each stage of alcoholism has its own set of behaviors related to drinking. Understanding them can help you recognize that you or a loved one may have an unhealthy relationship with alcohol. 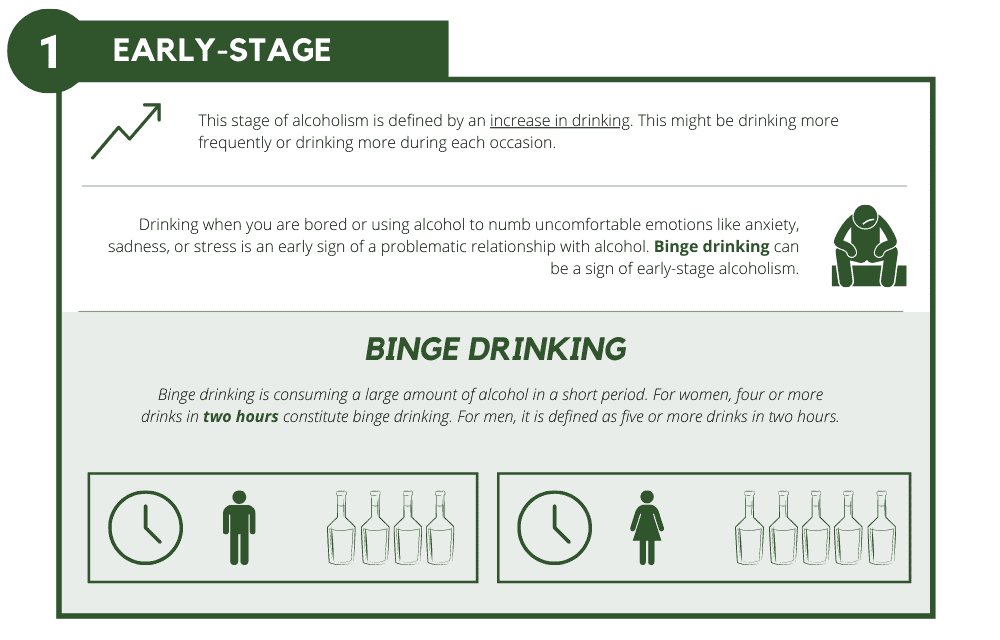 This stage of alcoholism is defined by an increase in drinking. This might be drinking more frequently or drinking more during each occasion. Drinking when you are bored or using alcohol to numb uncomfortable emotions like anxiety, sadness, or stress is an early sign of a problematic relationship with alcohol. Binge drinking can be a sign of early-stage alcoholism. Binge drinking is consuming a large amount of alcohol in a short period. For women, four or more drinks in two hours constitute binge drinking. For men, it is defined as five or more drinks in two hours.[2] 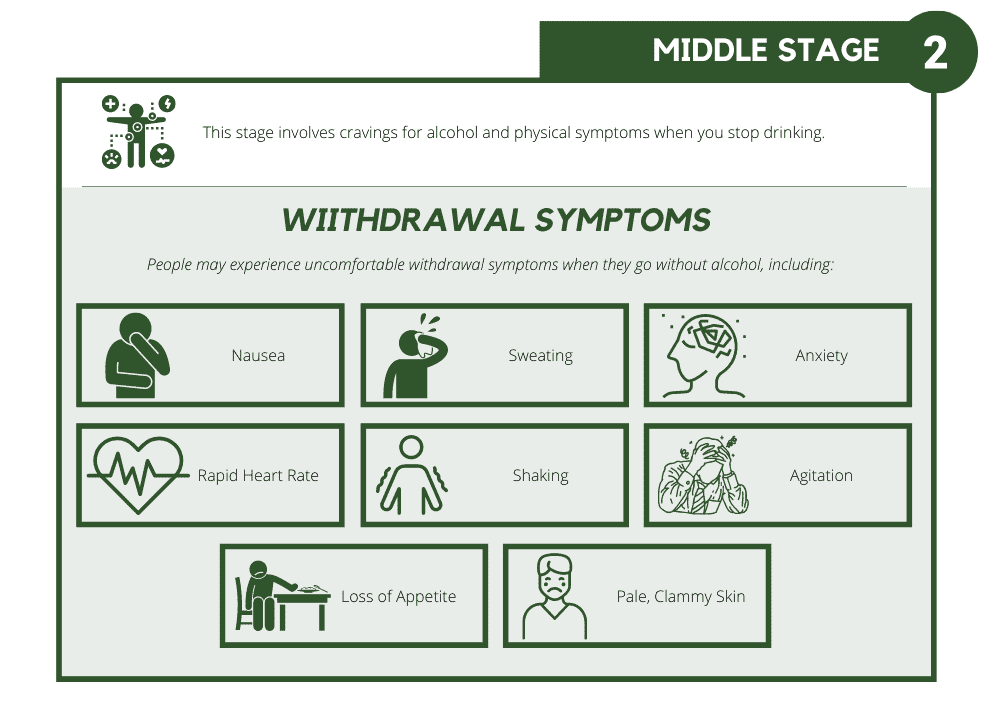 This stage involves cravings for alcohol and physical symptoms when you stop drinking. People may experience uncomfortable withdrawal symptoms when they go without alcohol, including:

During this stage, you may drink to keep yourself from experiencing these symptoms or because you have strong cravings for alcohol. 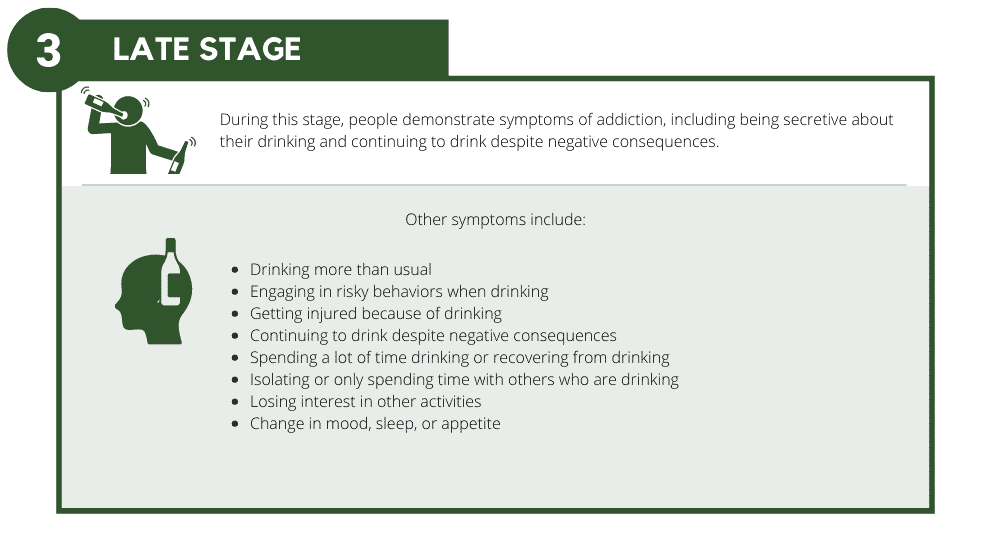 During this stage, people demonstrate symptoms of addiction, including being secretive about their drinking and continuing to drink despite negative consequences. Other symptoms include:

Many people experience uncomfortable or dangerous symptoms of withdrawal and require treatment, including medical supervision, to safely stop drinking.

This stage is the most serious and scary, both for the person struggling with alcoholism and for the people in their life. End-stage alcoholism is defined by a total lack of control over your drinking. People may experience physical damage to their brain, heart, and liver from drinking. They are at risk of overdose, suicide, and other fatal health conditions.

Despite being a very serious and critical stage, the end-stage does not have to be the end. With medical help and intensive addiction treatment, people can improve their health, learn how to live without alcohol, and go on to live lives that are not defined by alcoholism.

At any of the four stages of alcoholism, help is available. If you are concerned about your relationship with alcohol or you need support and treatment to fully detox from alcohol, please do not wait another day to get the treatment you need and deserve.

What Happens During Treatment for Alcohol Addiction?

During alcohol addiction treatment, you will start with an evaluation to help the staff determine which program you need to be successful. Many people start with medically supervised detox.

After detox, you will receive addiction treatment. This usually involves education, skill-building, individual therapy, holistic therapies, group therapy, and, sometimes, family therapy. The goal of treatment is to give you the skills to live your life without returning to alcohol abuse. You will have the chance to practice these skills in a calm, supportive environment with the help of your staff and a community of peers. The length of your treatment program will depend on several factors, including the length and severity of your addiction.

Do not wait another day to get the addiction treatment you need. At Woburn Wellness Addiction Treatment, we believe that you can overcome addiction when you have the right support. That is why we design our programs to be adaptable to meet people’s needs and meet them where they are. If you are ready for life-changing treatment, call now to speak with one of our admissions counselors.